The Tech Twins were honored to have a discussion with Jim Peacock of Peak Careers. We talked about “Must Have Technology tools,” as well as go-to resources we use, and even highlight some tips for preventing, minimizing, and combatting tech stress. Watch the Video:

For more info on the tools we mention, links are here. Loved talking with each other and with Jim, and it gives a sneak preview of some of what we’ll be sharing at NCDA.

Branding relates directly to story – and personal story is something career practitioners are all about. The ability to succinctly articulate what one does and for whom is at the heart of not only branding, but vocational identity. We can help our clients clarify what solutions they offer to a potential employer through developing a branding statement. The questions below can help guide that process:

Certainly, there are additional questions out there that can stimulate thinking about branding, but these 10 should get the creative juices started. At the core, attempt to answer this question: What problem(s) can I solve and for whom? To help with this, try to complete the following formula:

“I help high school students translate their dreams into reality.”

Challenge and a Question: Try your hand at writing a branding statement. If you get stuck, look over your resume, your calendar, your commitments and what they suggest about your brand. Questions: Do you like what it suggests? Is a change warranted? How does having a branding statement impact how you see yourself and opportunities around you?

Had a student present yesterday on the topic the impact of technology on psychological and mental health delivery. She shared a website called “PsyberGuide,” which is a really nifty website that critically evaluates apps based on credibility, transparency, and user experience. Here’s a brief video from Dr. Stephen Schueller, PsyberGuide Executive Director, describing the rationale for and goals of PsyberGuide.

Here’s a screen shot and link to their App Guide: 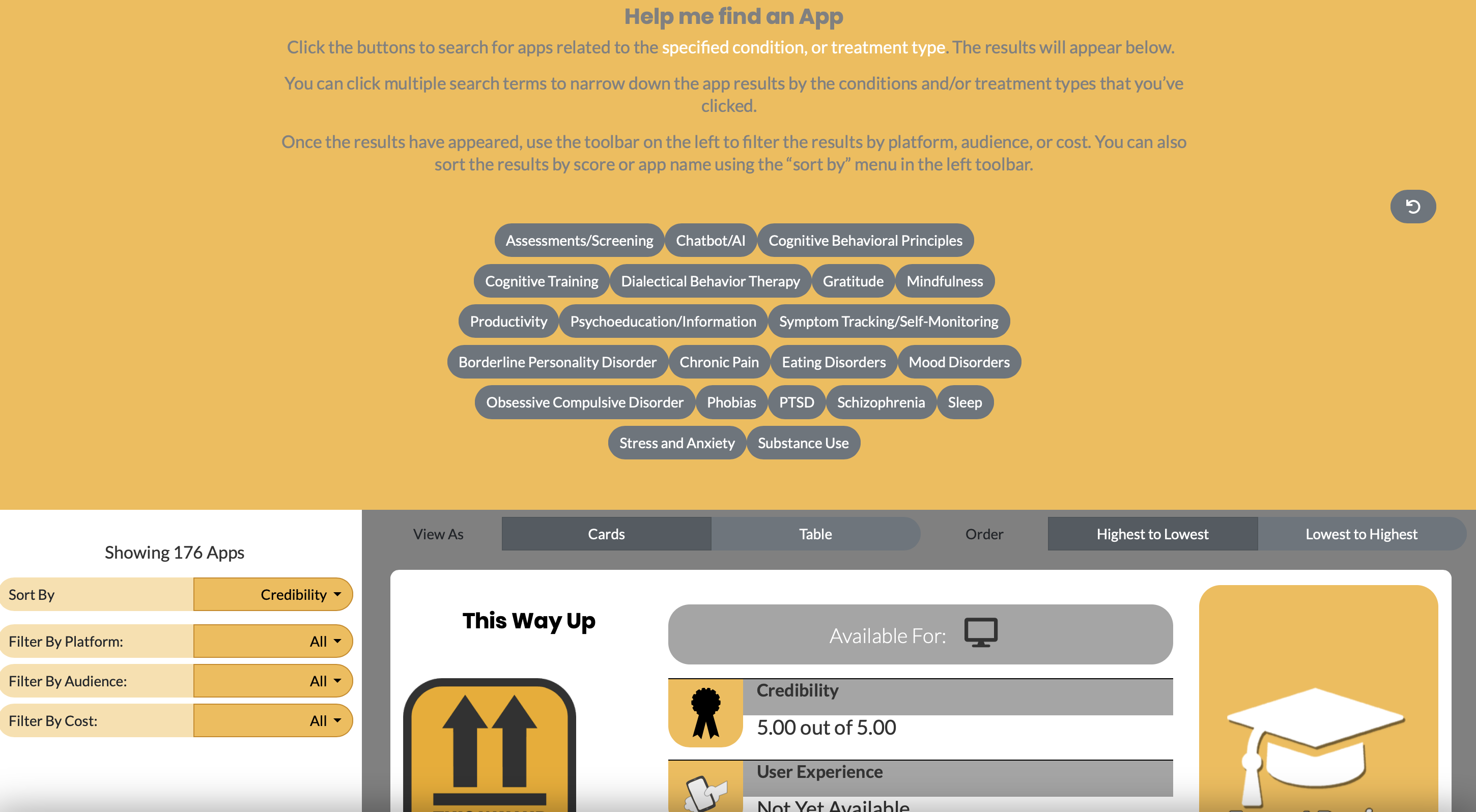 It’s excellent to have a source dedicated to reviewing apps for quality. However, they don’t currently have career apps like we do in our tool library. They also don’t include the other technologies such as websites, blogs, podcasts, and youtube videos. That being said, perhaps if you notice an app of interest on our page, travel over to theirs to see what the review is.

I (Deb) teach a technology and counseling course in the summers, and each summer, I try to cover not only what is longstanding technology (telephone counseling, email advising/counseling, video chats, dropbox/google drive), but also to push the envelope in exploring other tools such as apps and also collaborative tools. This past week, I experimented with one of the tools in Google Drive, the “jamboard.” 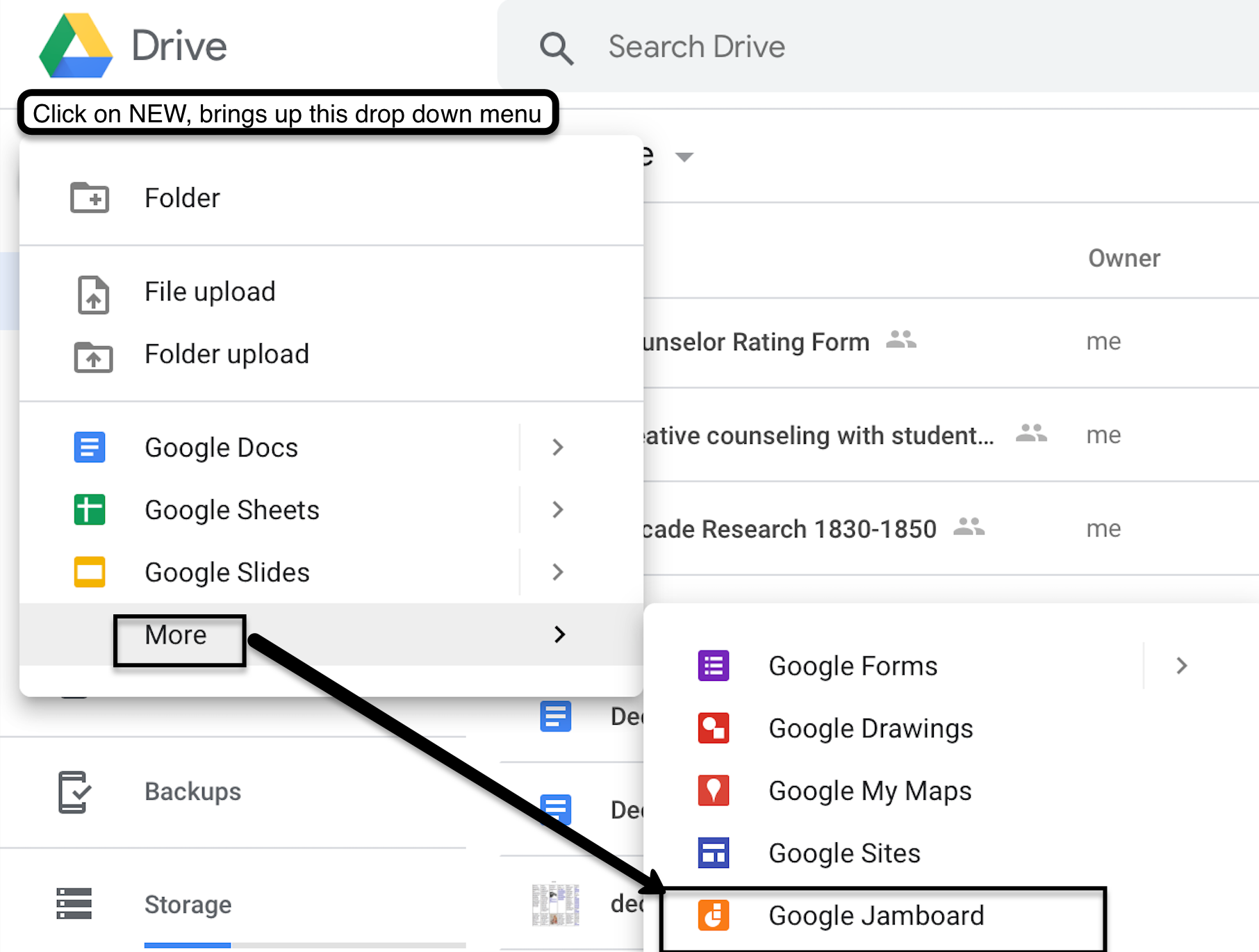 This class meeting was face-to-face, but I try to have them use technology regardless. The focus was on how to ethically integrate technology into face-to-face counseling, including what needed to occur prior to that decision, during (when with the client), and after it was introduced. They were divided into 3 groups of about 8 in each group and asked to use the sticky notes (but not talk) to brainstorm options for their group. Here’s an example of the before group: 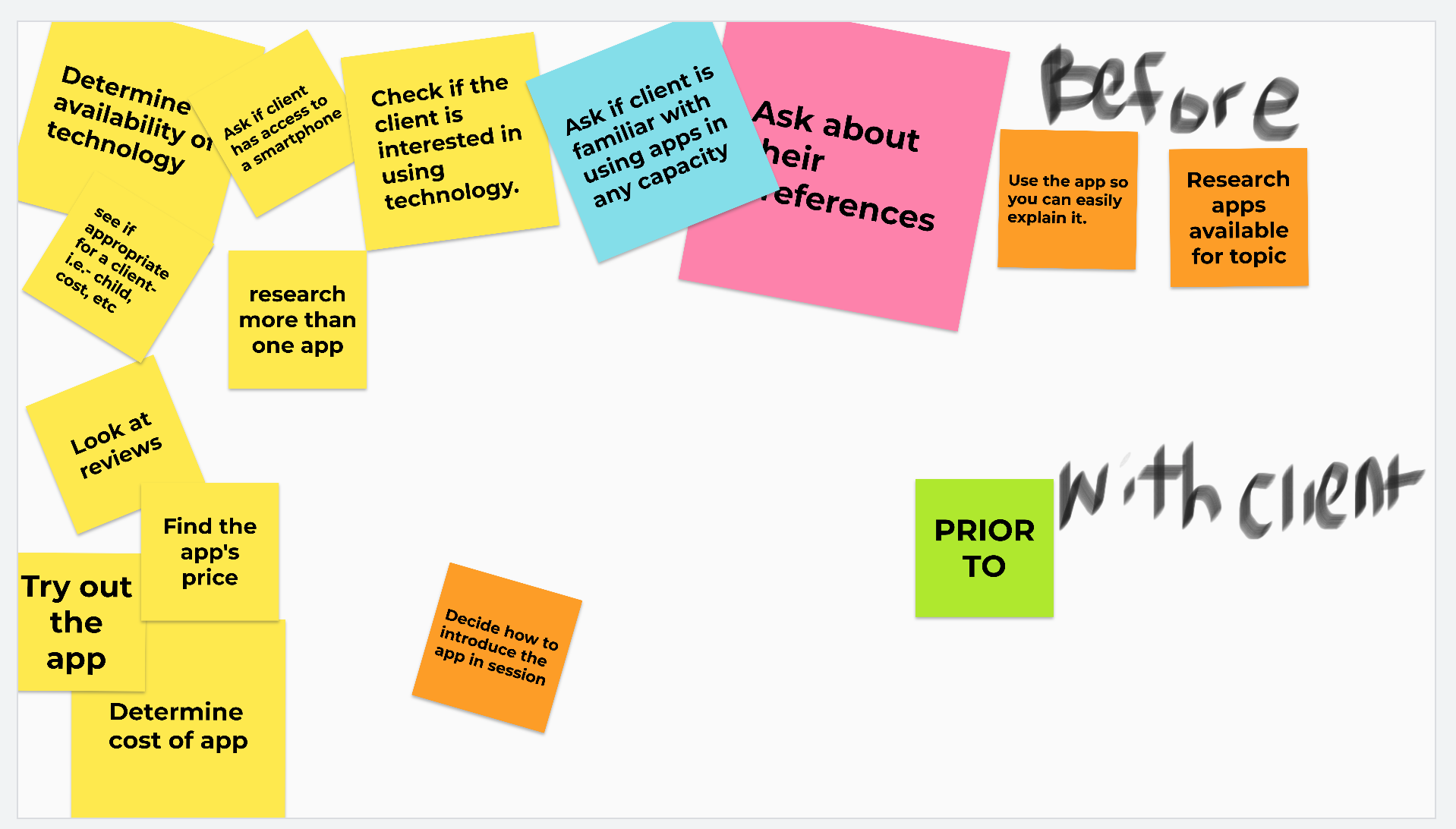 Following this, they were told to organize the stickies into similar themes. You can see the “during” group’s attempt at doing this as they started changing the colors to match the theme. 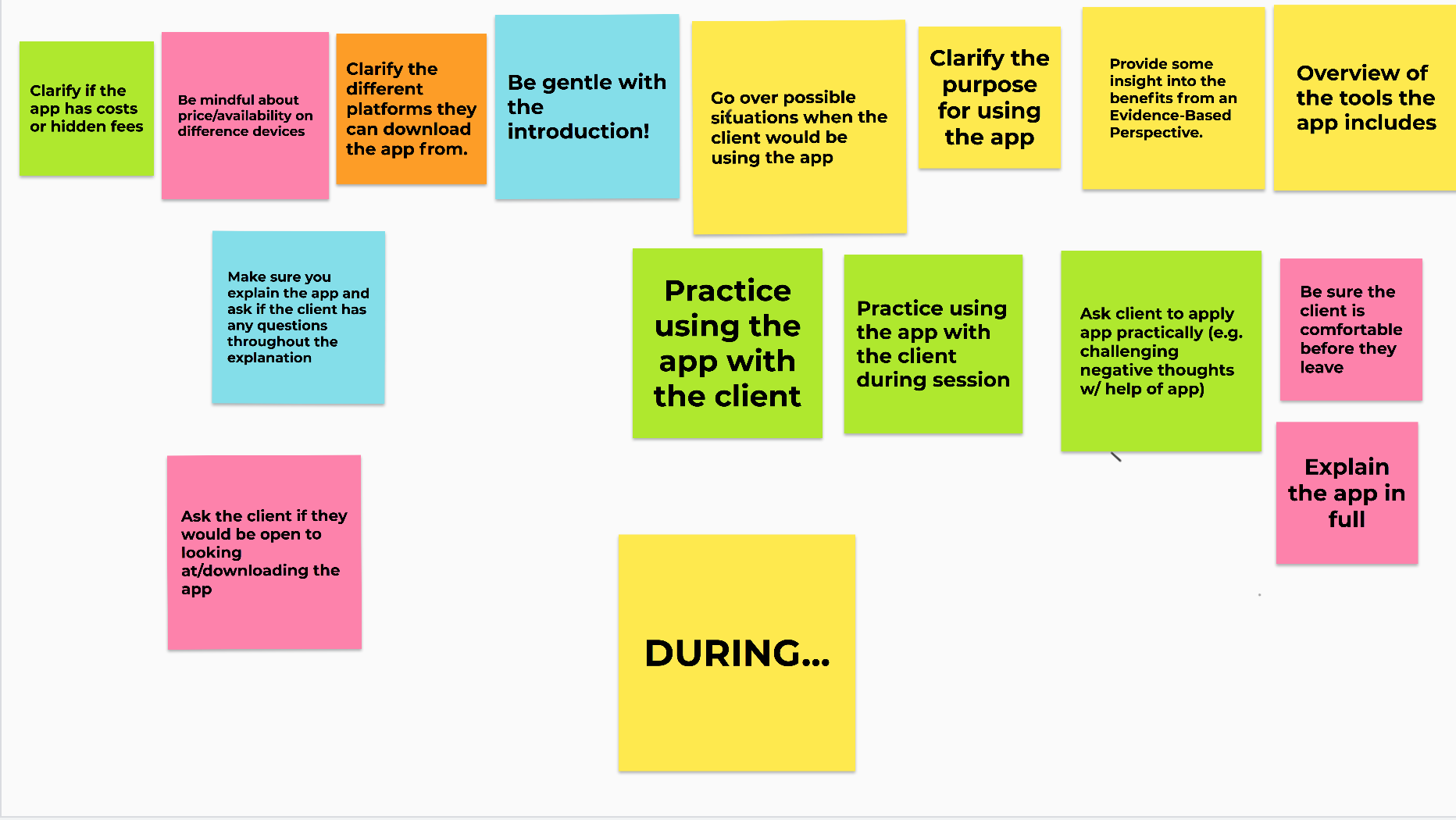 Finally, they were asked to collapse similar ideas and then prioritize them into steps. This is the “after” group’s attempt to do this: 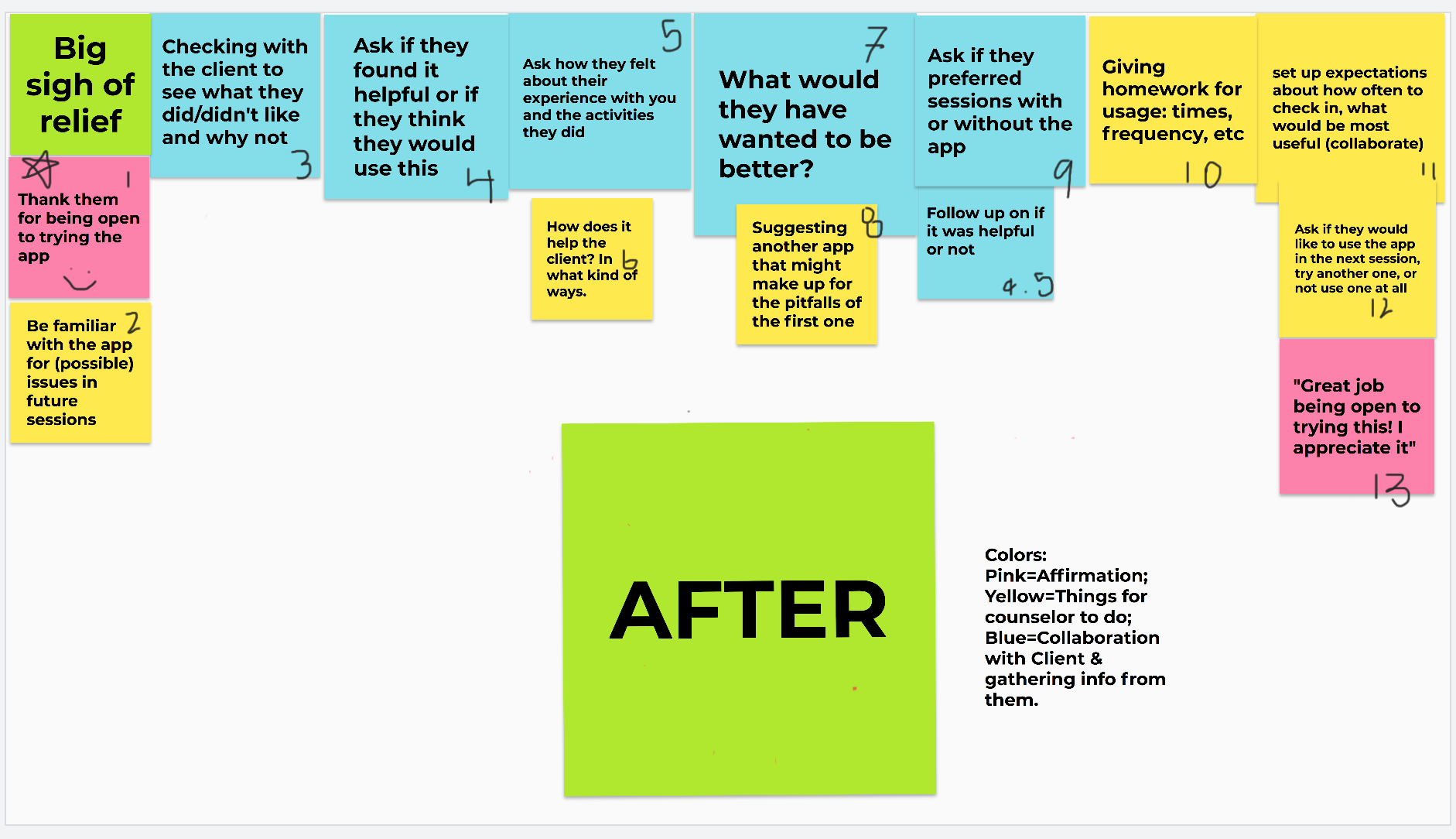 Following this, we discussed each stage, and I added to it, and allowed other groups to add to each group’s ideas. Then, we processed the use of the tool, and how it might be used with a client or with other colleagues. We decided that the tool was useful for the first part of brainstorming, where everyone throws ideas up, and it gave everybody the chance to contribute. It became more difficult in the next steps, where the decision had to be made as to who would do the classifying, and who would prioritize the steps. Clearly, 8 people couldn’t do the prioritization, and there was no easy way to foster that decision. Someone would have to step up to be the leader, even if it was with the goal of delegating tasks (you 3 prioritize the green stickies, you 3 prioritize the blue…).

The class thought that this could be a useful resource with a client in a number of ways. If the client was struggling with anxiety or depression, this board could provide a number of creative strategies or reminders (e.g., cognitive reframes) to help them in the moment. By the counselor also adding in a few (hopefully evidence-based) ideas, this could also strengthen the working alliance. The board could also be used to house goals, steps, links to videos or resources, encouragements, and so forth.

As an instructor, I thought it was a useful tool. I hadn’t thought through the mechanics involved in the steps of ordering and prioritizing. I guess I figured they could figure that out – but it proved to be a situation where one person in each group just took over. If I were to do it over again, I’d probably provide some suggestions on how to go about those steps. My goal in not was to provide them with the freedom to explore and create without my being overly prescriptive – but the desired result didn’t occur. Next time, I might have a sticky that outlines next steps, such as providing specific steps that need to occur, enough so each person might have a task, and have each person to put a sticky with their name and task #, from which point they would proceed. All in all, it was a fun experiment. It achieved the goals of building experience with a new technological tool for the students, as well as helping them to think through the steps of integrating technology. I’ll probably keep this one with some minor modifications for next year.

How one thinks about themselves, their options, and how they make decisions is an essential component of effective career decision making, as identified by Cognitive Information Processing. When that thinking becomes negative, or even escalates to dysfunctional, it can color the way the one views their strengths, interests, skills, as well as their career options. It can even impact their decision making process. Imagine telling yourself “I never make good decisions” as you are trying to make a career decision- it’s not going to bode well for the process!

Thus, career practitioners must learn how to help clients identify and alter those thoughts that are prohibiting progress in career decision making.

To read more about DCTs, check out this blog entry, written by Tech Twin Deb.